The Memorial of Charlotte Hierlihy

most Humbly Sheweth That your Memorialist having been one of the first Settlers on Miramichie River and after many trying Difficultys brought up a numerous Family was obliged to remove from thence for want of Hay lands, at the time of her removal, the River Tabisisintack being entirely uninhabited by any English Settler, your Memorialists late Husband Phillip Hierlihy, thought proper to make a settlement on that river – your Memorialist begs leave to -? Your Excellency that is the lands surveyed -? -? By Dougal Campbell Esq in 1803 there is no Marsh, and that she is at present wholely Destitute of the means of Keeping any Stock, except your Excellency will be pleased to Grant her the privilege of the Hay, Grass on the Glebe Lot, untill such time as an Established Clergyman is settled at Tabusintack the same having been promised your Memorialist by D. Campbell Esqr at the time of Survey Hoping that your Excellency will be pleased to take your Memorialists Situation ino consideration, as in Duty bound will ever Pray

The lot Surveyed for Charlotte Hierlihi contains a large tract of Marsh and is rekoned one of the best Lots – there is a Marsh Lot annexed to the upland Lot reserved for a Glebe on which about 12 Tons of hay may be annually cut as reported to me.

Charlotte Hierlihy asks permission to cut the Grass on the Lot reserved for a Glebe at Tabusintac.

Cannot be complied with.

Note from Mary Lynn Smith: The above-noted Memorial does not appear to have the signature of Charlotte Hierlihy.  At the same time it is possible that the signature may have faded out. 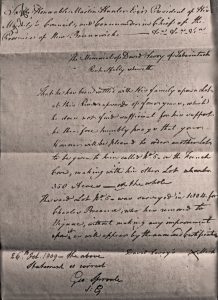 To The Honorable Martin Hunter Esq,r President of His Majesty’s Council, and Commander in Chief of the Province of New Brunswick

The Memorial of David Savoy of Tabusintack

Respectfully Sheweth That he has been settled with His family upon a Lot at this River upwards of four years, which he does not find sufficient for his support he therefore humbly prays that your Honour will be pleased to order another lot to be given to him called No. 5 – on the French Cove, making with his other Lot about 350 Acres – in the whole.

The said Lot No. 5 – was surveyed in 1804 for Charles Breaux, who has removed to Neguac, without making any improvement upon it as will appear by the annexed certificat

26th October 1809 – The above statement is correct

to all whome it may concarne this is to sartify that the Lot ? by D -? Esqr to Charles -? In Tabishintack has never had eany think done upone it and the mash is a Commons as  Witness our hands the 16 october 1809

… Never hath -? the least improvement made on the said Lot, and the Marsh thereto belonging -? was since been -? in Common Witness our ?

Dated at Tabisintack this -? Th October 1809