1814 PETITION
OtHo Robichaux
and OTHERS

Petition of Otho Robichaux and Others
March 18, 1814 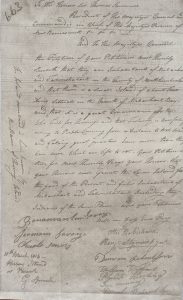 And To His Majestys Council the Petition of your Petitioners most Humbly Sheweth that they are Inhabitants of Nick a whack and Tabinshatack in the County of Northumberland and that there is a Small Island of about Two Acres Situate in the mouth of Nick a whack Bay and that it is a great Convenience for those who Fish for Herrings and that Fishery is now failing owing to People coming fom a distance to that Island and Taking great quantities Even more than they can cure, which are left to rot. Your Petitioners therefore most Humbly Prays your Honour that your Honour will Grant the same Island for the good of the Present and futur Inhabitants of Nick a whack and Tabinshatack Including Thy Indians of the Same Places.

and your Petitioners will in Duty Ever Pray

Side Note: The Island mentioned is here known by the name of Herring Island

Note by Mary Lynn Smith: It appears that three of the 16 petitioners were sons of Charlotte Hierlihy (nee Taylor) and that three were sons-in-law.